The fact that one is an Israelite does not necessarily mean that person is of the Jewish Religion, or lives in the State now known as "Israel."

It's very important, to those who are born again, who have the indwelling Holy Spirit, who are redeemed by the blood of Jesus Christ, that they understand what Israel is.

Israelites are in abundance throughout The U.S.A. Most have forgotten their identity as Israelites.  The words "Israelite" and "Jew" are not synonymous.  Many Israelites say they follow Christ, and are deceived by false prophet Government Controlled leaders in "Churches."

There is so much false teaching about Israel - as the signs of the END TIME are showing on the world stage - that it is necessary to tell the truth.  We will cover only the basic elements here. For more detail, check websites of other ministries below.

Knowing about Israel is important because the essential meaning of scripture about the END TIME is lost to the reader without this clarification.

There is a false teaching that if people bless the nation called "Israel," they will be blessed.  The present Nation of "Israel," so-called, is not the present Israel of scripture.  No temple structure exists in Jerusalem, and from the time of Christ about 2000 years ago, until now, the temple "house" has been desolate.

"Behold, your house [The Temple
In Jerusalem] is left unto you desolate.

"There shall not be left here [of
the Temple] one stone upon
another that shall not be
thrown down.

34 years after Jesus' death, burial, resurrection, and ascension to Heaven, the Temple was destroyed, but not completely.

What, actually, is Israel?

Because wickedness abounded on the Earth, God brought a worldwide flood.  Noah survived on a big boat with his wife and their 3 sons (with 3 wives). That was Shem, Ham, and Japheth.

From the line of Shem came Abraham and Sarah, who's son of promise was Isaac, who's wife was Rebekah, and one of their sons was Jacob who was renamed by God, Israel.

Israel is a lineage.


Later, the House Of Israel was taken into captivity, or left the land now called "Israel," and they scattered throughout Europe and elsewhere.  To give one example for brevity, one of the tribes* was "Dan" which became Denmark, which means Dans Mark.

Later, many Israelites migrated to what became The U.S.A.

The "Jews" in The United States are about 3 percent of the population.  They do not bless "all the families of the earth."  They are not numbered as the grains of the dust of the earth.  The number of those calling themselves "Jews" in Israel is a very small number, compared to the Anglo Saxons throughout certain parts of the earth.  The Anglo-Saxons are the Israelites.

What are they called?  They are called "Anglo-Saxons."  They are sons of Isaac.

It was prophesied that the Israelites would forget who they were:

"...I said I would scatter them into corners, I would make the rememberance of them to cease from among men."

"...and his seed shall become a multitude of nations."

The grandfather did not prophesy that the seed would inhabit a multitude of nations, as the Jews have.  He said they would become the nations.

The most important reason for Israelites to understand who they are is that an agreement was made between the Israelites and Yahweh (God) soon after He delivered them from slavery in Egypt.  Considering that the Israelites in The U.S.A. are on the brink of slavery, right now, it's quite appropriate for them to pay particular attention to this agreement:


"All the words which the Lord hath
said will we do, and be obedient."

Israelites, that applies you now as it did to your ancestors.  There is no separate New Testament agreement that one can disobey.  Continued widespread disobedience will lead the decadent U.S.A. to Slavery and Death.

The U.S.A. prospered when obedient, and now the decadent people have turned from God and are bringing themselves to slavery and slaughter.  Blinded by their sin sickness, many of them do not even see it coming.

The U.S.A. was promised to Israelites.  There is abundant prophecy about this in scriptures.  The Declaration of Independence, the Constitution, and the Bill of Rights are blessings of Almighty Yahweh (God).  Through His providence, this Nation was secured for spiritual and material prosperity, and to bring blessings to all the world.

Now, Satan's forces have overshadowed The U.S.A.  Concentration Camps are in place.  Foreign Troops
and mercenaries are scattered all over The U.S.A., ready to Disarm, Imprison, Enslave, and Murder the Israelites, the seed of promise, the beloved of Yahweh (God).


Yahweh is a God of love, mercy, anger, and destruction.  Hes permitted destruction and captivity of Israel before.

He has, by his love and mercy, withheld the harshest punishments upon his people.  This protection CANNOT CONTINUE while they refuse him.

It's time for The U.S.A. to turn to God and Repent.  It's time to turn from Sin, and claim the power of God, or be destroyed by Satan's armies, and by vaccinations, disease, famine, earthquakes, floods, radiation, etc.

If my people who are called by my name shall humble themselves, and pray, and seek my face, and turn from their wicked ways, then will I hear from heaven, and will forgive their sin, and will heal their land.

If you don't believe what is written here about current events and the high potential for the near future, go to this page.  Check out the documented evidence through a number of links.

Ask them to send you a free DVD titled ROOTS, FROM ABRAHAM TO AMERICA.

I assure you it will be worthwhile. 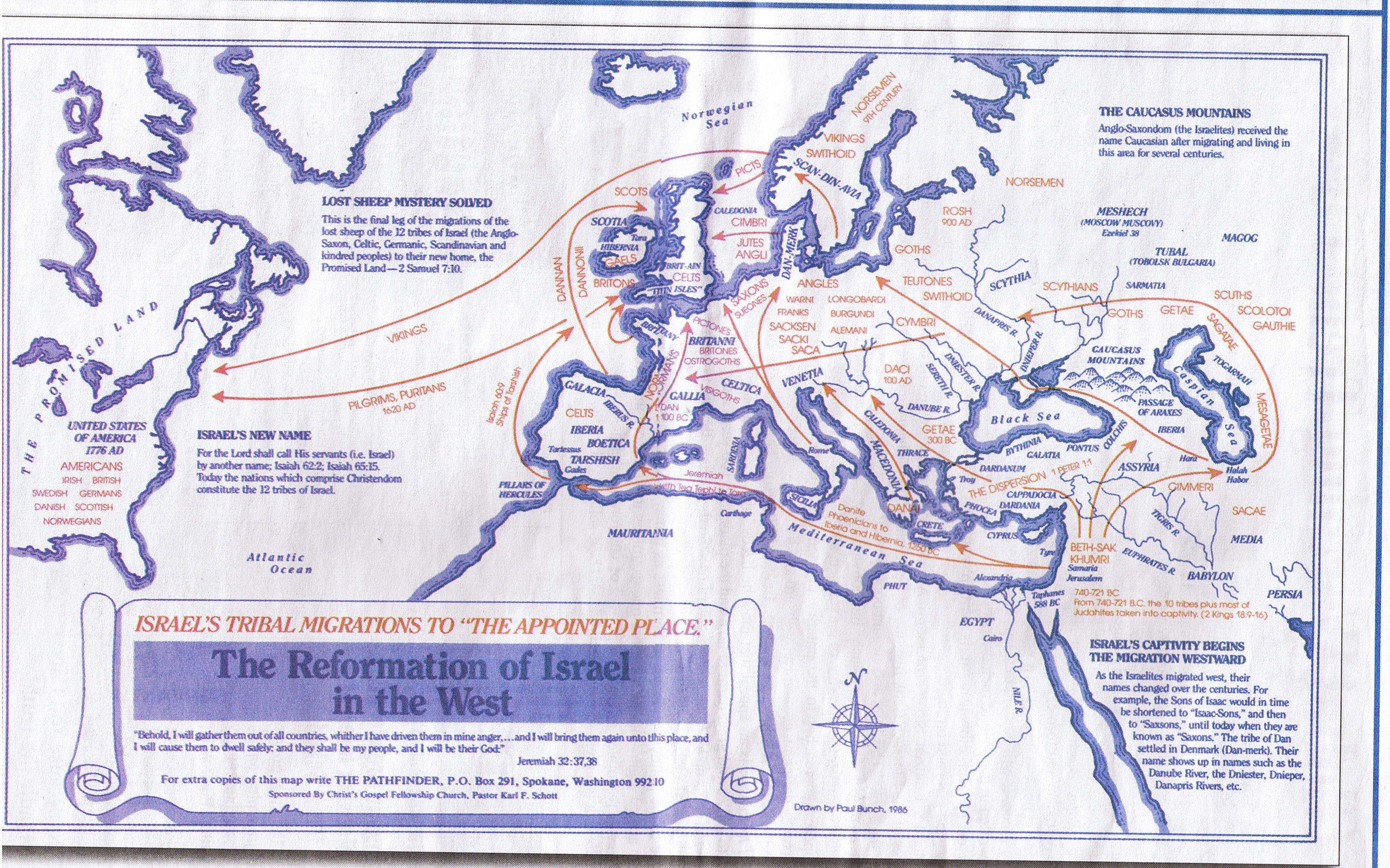 both by E. Raymond Capt

Here is a list of ministry websites that support the Anglo Israel doctrine.  This listing does not constitute an endorsement of all that they teach: